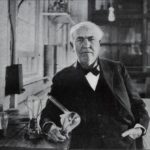 “My mind is incapable of conceiving such a thing as a soul. I may be in error, and man may have a soul; but I simply do not believe it.” – Thomas Alva Edison.

Our next step is to compile a table of the human features indicative of soul scrutinized against the criteria for materiality listed in our last post (See Table 4 in Appendix). Of the eight intangible human features, only life fits all of the criteria of materiality, and thus should be rejected in a reformulation of soul. Perhaps it Is conflated with the presumed dynamic nature of the soul which may be contained in other features such as will.

Consciousness also meets several of the criteria of materiality, and is of course common among nonhuman animals. Man’s apparently unique capacity for self-consciousness seems to me an insufficient argument for immateriality, but if human consciousness of self can be united with a cosmic consciousness, that might signify an immaterial nature.

Being cuts across both material and immaterial reality so seems to be a neutral consideration, but it appears logically inconsistent to discard the characteristic of actual existence. For now it may be best to bracket being in our reconstruction.

The remaining five features – mind, will, personality, identity, and self – fail to meet even half of the criteria for materiality and thus deserve positing in our final reconstruction. They seem to be real, but cannot be directly perceived (by others); rather they are indirectly revealed by behavior of the physical body. They certainly do not occupy space and are indivisible. The main criterion of physicality they satisfy is particularity which seems a reasonably exception since it is essential to the logic of any discussion in which human immateriality is conceived as individual rather than shared.

In short, it seems that the soul can be reconstructed as the composite of these five immaterial features of man. They defy current scientific penetration, though that may change in the future. Based on this discussion and our scale in Table 4, the core of human immateriality are will and self with personality, identity and mind layered over them.