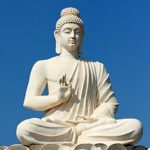 “Reason does not prove to us that God exists, but neither does it prove that he cannot exist.” – Miguel de Unamuno

Many people on reflection do not come to a traditional belief in God. There are a variety of alternatives which we will now discuss.

The first is Atheism, which actually has two meanings: (1) the belief that there is no God, and (2) the belief there is no personal God.1 The historical use of the term is the second meaning while modern proponents typically are using the literal (first) meaning.  Friedrich Nietzsche, Bertrand Russell, and Jean Paul Sartre are among the most famous atheist philosophers. Buddha also appeared to deny the existence of God.

Atheism does not rest on proof, but rather the assumption that it is unnecessary or irrational to postulate the existence of God when there is no direct evidence or proof of God’s existence; and the universe can be explained without resorting to the supernatural. This creates a logical inconsistency as it requires a different faith – that overall reality requires no explanation if each part or event can be explained and that the spontaneous appearance of the universe or an infinite regress in cause is possible.

Agnosticism is the belief that it is impossible for man to attain knowledge of God or that we do not know whether there is a God or not. It dates back to the skeptics of antiquity, was implied by Confucius in The Analects, and was argued vigorously by David Hume, but the term was coined by T.H. Huxley in the 19th century who based it on the theory that the human mind is too limited to know God.

Theoretically this leaves space for faith without knowledge of God, though this is not usual with Agnostics. However here too is an inconsistency:  since the Agnostic grants the existence of two types of reality – the knowable reality of human experience; and an unknowable reality beyond the human mind – the proposition of a deity is in fact a reasonable consequence of the latter (that is a divine mind that apprehends what is unknowable to the human mind). 2

Nonetheless, the inability of philosophy or theology to develop a generally accepted demonstration of the existence of God is a powerful argument in favor the agnostic position.