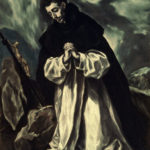 “In rational prayer, the soul may be said to accomplish three things important to its welfare: it withdraws within itself, it accommodates itself to destiny, and it grows like the ideal which it conceives.” – Santayana, Life of Reason

Should you conclude there is sufficient evidence or reason for belief in God and that He is a personal deity, you will next likely decide whether to practice an established religion. Either way there will be a critical subsequent step – relationship to or experience of the divine. There are three basic methods of this interaction – prayer, spiritual experience, and meditation or contemplation.

Prayer is of course direct conversation with or appeal to the divine. This can take the form of thankfulness, reverence (worship), remorse (seeking forgiveness), or intercession (help for oneself or another). According to Aquinas, Socrates thought we should pray only for ‘good things’ as God knows best what is good for us (Aquinas’ source is Valerius Maximus). But Aquinas thinks “our motive in praying is not that we may change the divine disposition, but that, by our prayers, we may obtain what God has appointed.,” He also says, “prayer …directs man’s intellect to God,” while inspiring us with holy desires;, and praying for our salvation conforms our will to God’s will.1

Paul Tillich expresses a more existential meaning of prayer as a self-transcendence which serves to “reunite the creature with its creative ground” and is “an actualization or our ultimate concern.”  But like Aquinas, he denies that in prayer, one expects God to interfere with existential conditions, rather one hopes to direct the given situation toward fulfilment. The faith the person has in God is the power which transforms the existential situation.2

Meister Eckhart expresses this more ethereally, “Not for the first time tomorrow will God grant thy supplication and thy prayer: he has granted it already in his eternity ere ever thou becamest man. Suppose they prayer is foolish or lacking in earnestness, God will deny it thee not then, he has denied it thee already in his eternity.”3

If you have ever been in a crisis, particularly one which threatens your life or that of a loved one, you probably appealed to the divine to intervene. In a sense, this can be interpreted as an instinctual ‘belief’ in God – i.e. by default in circumstance of helplessness. It may be worth mentioning that clinical studies of intercessory prayer for the sick give mostly negative results, although a 2009 review article of ten studies on 7446 patients concluded the evidence did not support a recommendation for or against prayer for aiding the sick.4

Non-crisis prayer however requires more conscious belief and is experienced as calming and rewarding in itself to its practitioners. It can lead to a spiritual experience – the topic of the next section.