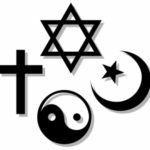 “True religion is rather the power to contemplate nature with a mind set at peace.” – Lucretius.

A subject close to the issue of the existence of God is that of religion. This is another word that is difficult to define because of its many nuances. Webster’s first meaning (of nine) is “a set of beliefs concerning the cause, nature, and purpose of the universe, especially when considered as the creation of a superhuman agency or agencies, usually involving devotional and ritual observances and often containing a moral code governing the conduct of human affairs.”1

The Encyclopedia of Philosophy lists nine features of religion: (1) belief in supernatural beings, (2) distinction between sacred and profane objects, (3) ritual acts focused on sacred objects, (4) a moral code believed to be sanctioned by the gods, (5) religious feelings aroused by sacred objects and ritual practice, (6) prayer and other communication with the gods, (7) a world view with a place for the individual, (8) a more or less total organization of one’s life based on the world view, and (9) social group bound by the above.2

Professor Robert Oden in his lectures on comparative religions uses a more modern sounding definition by H.H. Penner: “…a communication system that is constituted by supernatural beings and is related to specific patterns of behavior” (his italics).3

Traditionally there are 11 recognized major world religions: Judaism, Christianity, Islam, Buddhism, Hinduism, Jainism, Zoroastrianism, Confucianism, Taoism, Shinto, and Sikhism (several have major branches). Most of us have first-hand experience of one or more of these religions and have practiced a religion at least part of our life. One of the great enigmas of humanity is the fact that each religion believes itself to be true and the others untrue.

In his book, Truth in Religion, Mortimer Adler notes that pluralism is desirable in matters of taste or ‘poetic truth’ (which includes religion), but not in matters of factual or logical truth as in science which he classifies as ‘transcultural.’ His principle of the ‘unity of truth’ requires that parts of the whole truth be compatible with one another. The truth of science and the truth of religion are either (1) truths of different kinds (Averroes position), (2) truths of the same kind and therefore compatible (Aquinas’ position), or (3) separate logic-tight compartments. Religious beliefs cannot be proven, but can be disproved or discredited by science or philosophy. Since philosophy more readily becomes transcultural than religion, it is a useful criterion for religious truth. As an example, he claims philosophy demonstrates the existence of a ‘single supreme being as the indispensable, creative, or exnihilating cause of the cosmos,’ which challenges the truth of most eastern religions.4

I view religion from the opposite vantage point as essentially instant philosophy, that is, following a specific religion’s teachings means accepting its answers to the most important questions philosophy poses: Is there a God? How do I relate to Him? What is good and evil? How should I conduct myself in the world? What is happiness? And even what is the meaning of life? However, this appears too easy, even dangerous, until perhaps there is an example of Voltaire’s ideal religion – one that teaches “nothing but the worship of God, justice, tolerance, and humanity”.5