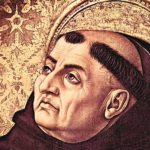 “…the truth about God such as reason could discover would only be known by a few, and that after a long time, and with the admixture of many errors.” – St. Thomas Aquinas

Last time we discussed the ontological argument for the existence of God. Now we will examine the cosmological argument which is based on thinking about contingency in and of the universe. For a philosopher a contingent thing may be or may not be, or might have been or might not have been, that is, it depends on something outside itself. For instance, you and I are contingent; we might have never been born, but were brought into existence by the actions of our parents. The color of grass is green to the human eye, but might have been otherwise, that is, there is nothing about grass that logically demands it be green. Alternatively a non-contingent thing is necessary or necessarily true and cannot be imagined otherwise – take for example the equation ‘2+2=4.’

The cosmological argument looks at the contingent facts of the universe and proceeds backwards to find an independent or non-contingent explanation. It was developed most famously by St. Thomas Aquinas in the first three of his five proofs for the existence of God, called by him the ‘Five Ways’* in Summa Theologica. Expressed briefly, they are:

1.  Motion – what is moved must be moved by another and so forth, but one cannot go back infinitely, therefore there must be a first mover which is God.

2. Cause – all contingent things have a cause and again the non-infinite regress takes one to the first cause which is God.

3. Possibility – all individual things are possible, but must derive from something ultimately necessary, that is God.

This is an example of an a posteriori argument; it depends on experience of the world rather than entirely on logic. There are cogent arguments against it, for example, David Hume argues that an infinite series of causes or motions is not illogical and needs no outside explanation. He also denies the meaning of necessary existence and points out that the universe itself might be necessarily existent. Very involved arguments continue into modern times, some of which make up an entire chapter in Baruch Brody’s Readings in the Philosophy of Religion and an intriguing entry in The Encyclopedia of Philosophy, Volume 2 for the curious.

Perhaps the critical take-away is that the cosmological argument is the theologian’s answer to the question: ‘Why is there anything at all?’- perhaps the most profound question in philosophy. Later we will consider other proposed answers.

*The fourth and fifth ways are briefly:

4. Gradation of things – each comparison of a thing, for example its goodness, must be compared to a greater thing, the greatest being God

5. World Governance – things are directed to an end, which requires an intelligent director which for the universe is God.