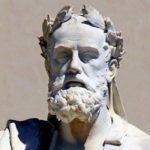 The next great problem in the search for a path to a philosophically guided life is the immense question of the existence and nature of God. As we discussed earlier, prehistoric man used the concept of divine spirits to explain otherwise mystifying events in the world. This carried over into early civilization as anthropomorphic agents with superhuman abilities that interact in various ways with mankind and expect worship and sacrifice. After thousands of years, during what Karl Jaspers calls the axial age, some cultures  – especially the Hebrews, but also Zarathustra and some Indian and Greek philosophers- began to realize polytheism was unnecessarily complex, even illogical, and began to proclaim or argue there was only one God or at least one supreme divinity (it is difficult to know exactly when atheism appeared and how widespread it was at any given time due to cultural restraints on its proponents). In any case, polytheism essentially disappeared by modern times leaving only two fundamental questions: 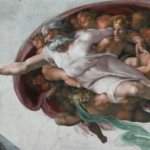 The following blogs will address these two questions in a systematic order. First we will look at arguments for and against His existence. Thereafter we will look at different ideas on his attributes followed by theoretical reasons to believe in his existence outside of proof. Then we will make a very brief survey of the subject of religion, followed by the possible means to make contact with God and explore the concept of a relationship with Him. Last we will examine the reasonableness and consequences of the positions of atheism and agnosticism.

If the reader already has firm beliefs on these matters, it may be tempting, even reasonable, to skip the rest of this section. However if those beliefs are not based on careful reflection, they are not philosophically valid as such. As always, short cuts in philosophy may lead to error or enduring doubts.

*I will use the customary capitalized male article and possessive in reference to God as preferable to using the word, ‘God’ repeatedly or the neutral ‘It’ or even the feminine ‘She.’ However of course, like most people, I do not imagine God as having gender in the human sense and the male gender is only used for simplicity.