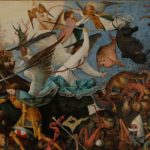 In the last two blogs we discussed the mythological conflict of Good vs. Evil as a paradigm of the human conception of the universe especially as expounded by Zarathustra and reinterpreted by Friedrich Nietzsche.

Professor Francis Ambrosio in his course Philosophy, Religion, and the Meaning of Life1 looks more closely at the position of humanity in this arena and proposes two timeless means to personal meaning: the role of the saint and the role of the hero. In that context he sees Nietzsche as a tragic hero, who self-identifies as the antichrist, but is in fact a misunderstood and unappreciated proponent of secular humanism, proposing “the ideal, not of oppressive domination of others, but rather of mastery over the self.”

So where does all of this leave modern man in defining his place in this mythic conflict? The answer recurs throughout literature whether sacred or historical:

“The only thing necessary for the triumph of evil is for good men to do nothing.” – Edmund Burke, 18th century British politician and supporter of the colonies.

“The world will not be destroyed by those who do evil, but by those who watch them without doing anything.” – Albert Einstein

These varied sources tell us the best way to defeat evil and perhaps more importantly to separate oneself from evil is to be a force for good. So returning to Frankena’s principles in the chapter on societal ethics; if our primary obligation is first not to commit evil actions and next to try to reduce evil, and our secondary obligation is to promote good, human history suggests commitment to doing good is the means to both defeat evil and transcend it.

Nietzsche shows us that self-mastery, rigorous analysis of ethical norms, and acceptance of and participation in the real world are necessary to success. Professor Ambrosio refines the human struggle; to defeat Evil and promote Good is done through the selfless courage of the hero and the personal sacrifice of the saint. I think Zarathustra and Nietzsche would agree that they are the uberman.

1Ambrosio, Francis J., Philosophy, Religion, and the Meaning of Life. 2009, The Great Courses.