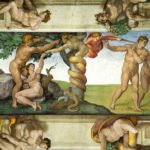 “Charity is the gravitational force which keeps civilization in its orbit.” – Arthur Koester

My final category of ethics – ‘supererogatory duty’ – is not often the subject of philosophical discussion, but its sporadic appearance in my reading suggested to me a potential role it could play in human ethics. The Oxford Guide to Philosophy1 defines supererogation as action beyond the demands of duty, noting that such actions are praiseworthy to perform, but not blameworthy to omit. Traditionally such acts are seen as those of a saint or a hero. However I see supererogatory duty as the best means to resolve one of man’s most difficult conundrums, that of guilt and the myth of ‘original sin.’

Most Christians and many non-Christians are familiar with the concept of original sin, where the disobedience of the first humans, Adam and Eve, eating from the fruit of the tree of the knowledge of good and evil led to their expulsion from the Garden of Eden. In this tradition, as we are all descendants of Adam and Eve, we inherit their sin and thus come to the world as sinners or impure, fallen creatures. I struggled with the fairness of this assertion in my youth, and only later philosophical study opened for me window of understanding.

It dawned on me that man’s ‘fallen’ status or ‘original sin’ is best seen as a metaphor of the imperfection of being human and the universal and perhaps unavoidable propensity to error and vice as viewed from at least four vantage points:

1)    Biologic – Non-human life exists instinctively, is untroubled by reflexive thinking, and incapable of immoral behavior so remains intrinsically a part on nature. Man lives deliberately beyond instinct, ruminates constantly, and acts in ways contrary to his environment, thus separating himself from nature.2

3)   Existential – Man has unlimited desires, imagination, and freedom, but is confined to a limited body and lifespan, and is a result overwhelmed by the universe.3

If we are in fact ‘fallen’ creatures, imperfect and impure for most or all of our lives, making countless mistakes, and hurting others, even if unintentionally, the question remains, how can we expect to find redemption or salvation? For Christians, belief in Christ completes this process. For the rest of us, supererogatory duty (combined with humility) seems to me the best means to psychological and spiritual cleansing. Culturally this is labelled as charity (not accidentally one of the Christian virtues- despite the presumption of salvation through faith, the Church fathers understood: personal salvation demands supererogatory duty). For the wealthy, this is financial munificence (noblesse oblige); for others it may be volunteer work, a heroic or pious occupation (e.g. firefighter or monk), or taking on a cause.

Added to atonement and self-forgiveness, I believe supererogatory duty offers the final ethic in personal apotheosis.