“… the virtues arise in us neither by nature nor against nature. Rather, we are by nature able to acquire them, and reach our complete perfection through habit”– Aristotle 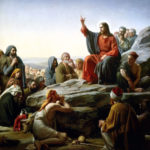 When most people discuss morality, they are thinking about how a person interacts with others, particularly through direct contact. This refers to conduct with family members, friends, coworkers, customers, and strangers. It includes such issues as keeping promises, telling the truth, respecting another’s property, not inflicting injury, and so forth. This appears to be an area which remains resistant to scientific certainty, so philosophers still debate systems of morality and specific moral issues actively.  I believe three approaches elucidate good basic reasoning at this level of ethics.

The first is the Golden Rule best known from the New Testament, Matthew 7:12, the words of Jesus at the Sermon on the Mount. This is popularly known as “Do unto others as you would have them do unto you,” though there are some differences in the phrasing based on which version of the Bible is consulted. However, this is a reiteration of what is “perhaps the oldest ethical proposition of distinctly universal character. ”1 Additional versions include (among others):

“What you don’t want done to yourself, don’t do to others.” – Confucius – The Analects

“That nature alone is good which shall not do unto another whatever is not good unto its own  self.” – Zarathustra – Avesta

“May I do to others as I would that they should do unto me.”  – Plato

“Do naught to others which if done to thee would cause thee pain.” – Mahabharata

It appears treating others as one wishes to be treated oneself is a nearly self-evident ethical maxim and the platform for building a moral system for human interactions.