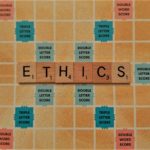 “Philosophy is ethics, or it is nothing at all.” – Dagobert Runes

As I discussed in the introduction, the essential function of philosophy comes down to the question: how should I live my life?  Until now, we have been discussing the nature of reality which is the more static dimension of philosophy, and is, over the course of history, increasingly falling into the domain of science. Ethics is more dynamic and has defied scientific analysis to date. It is about how we live our life, about our actions, particularly determining right and wrong action.

Ancient philosophers called right action ‘virtue’ and wrong action ‘vice.’ Modern philosophers seems to prefer the word ‘morality’ over ethics and more recently the trend is to  dissect morality further into its atomic level of values. Perhaps these modified concepts of ethics will prevail in the future, but I still prefer the time honored terms of the ancient thinkers and will mostly address human conduct from that vantage point.

Of course the crux of ethics comes down to deciding what ‘right’ and ‘wrong’ mean. This is an example of where one’s understanding of the nature of reality becomes critical. For instance, in the aristocracies of ancient empires or the middle ages, property rights and local order were maintained by a small group, so strength and honor were the highest virtues (think of King Arthur or the movie Gladiator). In modern history where the highest social reality is a community or a nation (‘the state’), sacrifice and duty become the highest virtues (think of the soldier in World War II). In Christianity, where loving one’s neighbor is most highly regarded, charity and selflessness are the highest virtues (e.g. Mother Theresa).

The role of philosophy is to define a basis for ethics and conduct that is logically consistent with one’s picture of reality. Since people vary in their view of reality, there is room for variation in ethics. This is not to say that ethics are relative. Rather ethics tends to be tailored to historical and individual circumstances and one’s personal understanding of reality. In any case the carefully thought out ethical systems and principles of the great thinkers should not be discarded in the absence of careful reflection. One such example is abortion – forbidden by Hippocrates-  but after extensive medical, political, and judicial deliberation is legal today, and no longer part of the modern Hippocratic oath.  This site cannot determine what makes for right and wrong action for all its readers, but it can encourage critical analysis of one’s beliefs and actions, and offer robust systems for consideration.

As in our discussion of the nature of reality where there were multiple tiers, human behavior falls into five tiers:

2..  Direct Interaction with Others

We will now discuss each tier in more detail.