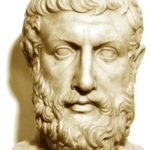 “Not being cannot be – there is no void.  The One fills every nook and cranny of the world and is forever at rest.” – Parmenides.

While neither of my dictionaries defines ultimate reality, the online Merriam-Webster defines it as “the supreme, final, or fundamental power in all reality.” While I find this reasonable, I tend to think of ultimate reality as the highest reality inclusive of all being and all ideas or as the logically first being from which all other beings and cosmic law are derived. For the monist or strict materialist then, cosmic reality is ultimate reality and largely well defined. For some philosophers and virtually all theologians, ultimate reality transcends the physical universe.

Several ancient Eastern philosophies and religions embrace an ultimate reality. Hinduism identifies Brahman as the power sustaining the cosmos. Lao Tzu refers to the ultimate reality as the Tao, or Way, a somewhat obscure concept of timeless universal order.

Plato finds ultimate reality in the Ideas or Forms, perfect higher level realities only reproduced imperfectly on Earth (think of a perfect triangle in your mind versus the best triangle you can draw on paper). Plotinus takes Plato’s thoughts to a more mystical level with the One representing the supreme form of the Good. St. Augustine imports this view into Christianity, identifying the Christian God as the supreme Good. Spinoza sees ultimate reality as the totality of Aristotelian substance in the natural world usually considered a form of pantheism. Einstein embraces this concept of ultimate reality, “ that is God and the universe are indistinguishable; the better one understands how the universe works, the closer one comes to God.”1

One important recent writer is particularly poignant in approaching this subject: Paul Tillich, a theologian, who following an existential line talks about ultimate concern from a more real-life perspective. He proposes that each individual will identify and then act on or default to the most important focus of his or her existence. It may be, for instance, material goods, another person, a nation, humanity, or a deity. However if one chooses as the ultimate concern something less than the ultimate reality or an erroneous ultimate reality, it may lead to disappointment, disillusionment, or alienation from life and ‘true’ being. In that case the ultimate concern becomes effectively the object of ‘idolatry.’ Tillich believes that the sum total of being is the ultimate reality and equivalent to the God of religion, especially the Christian God, and only there can authentic meaning be found.2