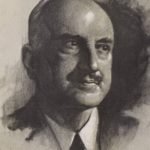 ” … reality is a term of discourse based on a psychic complex of memories, associations, and expectations, but considered in its ideal independence by the assertive energy of thought.” – George Santayana

Of course an individual’s concept of internal reality will color the interpretation of the other tiers of reality.  Internal reality is by definition accessible without the use of the senses; proximate reality is my term for the composite of things as they present to us directly through the senses.  Now on the face of it, we should have no doubt about the reality within the reach of sensation, especially vision, but philosophically we want to confirm that assumption and investigate the consequences.

For example, in the last blog, I alluded to Immanuel Kant who in his Critique of Pure Reason notes that real things can only be experienced by us as perceptions – in fact we can never know the ‘thing-in-itself.’ For example, a red apple is only red because of the way its surface reflects light to an eye with a certain physiology; it is not red in-itself.  However Kant believes the mind naturally takes perceptions and places them into categories such as cause and effect or possibility and impossibility. From this Kant creates his “Copernican revolution”; reality in not mainly a function of external things but is generated by the mind’s organizing of external perceptions, that is the center moves from the things themselves to man’s mind. His model did in fact start a revolution, that is, a new field of philosophy known as German idealism which dovetailed nicely with 19th century romanticism.

George Santayana provides a critical analysis of the reality of perceptions in The Life of Reason. He agrees with Kant that the perceived world is universally experienced by man as occurring in space and time.  He observes that perception does not define a reality, rather reveals a ‘chaos of multitudinous impressions’ mixed with internal feelings and emotions.  Using the faculty of memory, vestiges of prior perceptions are correlated to current perceptions to give form to reality, a process he identifies as intelligence.  Knowledge is a recognition of something absent in direct perception – representation. In response to the skeptic, he says we cannot expect certainty in our knowledge of external reality, but belief is warranted by evidence (of the senses) as revealed through understanding. That is, pragmatically, reality is the mind’s impression of the immediate world that assures consistency in future perceptions and sensations.1