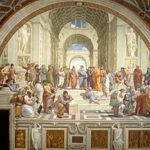 Invariably every philosophy textbook and many philosophers’ main works begin with the surprisingly difficult problem of defining philosophy. I reluctantly join them…The Greek root is easy enough philo means love and sophia means wisdom; hence ‘love of wisdom.’ While this is strictly true till this day, it seems too vague to serve as a practical definition. Webster’s dictionary* offers 6 meanings:

1. The rational investigation of the truths and principles of being, knowledge, or conduct.
2. Any of three branches, namely natural philosophy, moral philosophy, and metaphysics.
3. A system of philosophical doctrine.
4. The critical study of the basic principles and concepts of a particular branch of knowledge.
5. A system of principles for guidance in practical affairs.
6. A philosophical attitude, as in composure and calm in the presence of troubles or annoyances.

Philosophy remains difficult to define, but most readers’ notions of it should be satisfactory if the information above is unclear. Perhaps a few simplified definitions of philosophy as given by the philosophers themselves will also help.

“Total perspective, as mind overspreading life, and forging chaos into unity…all questions that vitally effect the worth and significance of human life.” – Will Durant.

“That primordial activity whereby self-respecting men seek to come to terms, not only with the ends of science or of art or of government, but with their own individual destinies.” – Henry D. Aiken.