Last time I began telling the tale of my first day as a public school substitute teacher ending on the low expectations asked of the substitute. I arrived at the school by 6:00 AM, but had to wait in the front office until 6:55 AM when the administrative staff arrived to give me a key (classes began at 7:25 AM). I won’t deny I was anxious, so I came early hoping to get into the classroom to figure out logistics and to review the substitute package – I thought I needed to be well prepared to take on 30 students at a time. I was extremely thankful that the regular teacher had left me clear instructions and photos of each student by class. The students began arriving about 7:20 AM and knew they had a substitute that day, even that I was a practicing physician, although I suggested they just call me “Mr. C.” 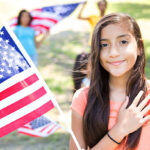 The first ‘class’ was Advisory or what in my day was called Home Room. I took attendance which was difficult given the unusual names in vogue these days, then we listened to a few announcements and a corny riddle which elicited groans from the class, after which most of us stood up for the Pledge of Allegiance. Next we had some fun – one of 10 snacks at the front of the class could be picked by students whose names were drawn from a container. They universally declined switching to my alternative of awarding the prizes based on answering a question correctly, but were happy to have a chance at a second pick with a question (For example: “What is the largest prime number less than 100?”). Missed questions were then open to the rest of the class for a snack grab.

Next were two math classes, Math Block I and II, consisting of mixes of my first group and some from my Language Arts/Social Studies partner teacher’s home room. The students then had lunch and Related Arts (anything from music to P.E.) after which were the two science classes, Science Block I and II, again with various mixes of these same 54 students (of 62 total; 8 were absent). I would rate my performance a C+ since I struggled with the first math group, but finished the lesson plan with the second, and I finished the lesson plan with the first science class, but limped through the second. While the first math class degenerated into virtual mayhem, the rest were largely controlled, despite frequent requests to go to the bathroom or the library, and distractions ranging from constant chatter and leisure-book reading to forbidden cell phone use, and computer games.