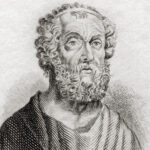 “It makes me furious! How mortals blame the gods! For they say that their troubles come from us; but they incur pains on their own beyond their allotment, because of their wickedness.” – Homer, Odyssey 1.32-34.

In our perusal of ancient Greek and Hellenic philosophy, we last looked at contentment in the teaching of the Skeptics, particularly Pyrrho. Like the Cynics, peace for the Skeptics comes in part from limiting involvement with and concern for society. Developing in parallel with Cynicism and Skepticism was Stoicism, the most enduring of the Hellenic traditions possibly because, unlike the others, it accommodated, even encouraged continued societal participation including in the fields of business and politics.

Stoicism as a school started with Zeno of Citium who was a student of Crates in turn a student of Diogenes the Cynic. He set out the arguments for his positions while walking in the Painted Porch or Stoa Poikile – hence the name Stoicism for his philosophy. His basic metaphysics is that the world is divinely ordered and humans have free will, but actual outcomes of action are determined by providence meaning a divine force. Zeno considered his teachings the “art of living,” emphasizing a control over one’s emotions and an understanding of nature and the cosmos as a unified whole. Reason and the overcoming of passions are for Zeno the supreme achievements of humans.

Stoicism developed a largely psychological approach to tranquility – somewhat like modern cognitive therapy. The first key principle of Stoic conduct is apatheia which refers to acceptance of and detachment from the results of action and circumstances in the environment, quite unlike the more negative word ‘apathy’ of current English usage. The logic is simple; the chain of causes and effects is an unbreakable circle such that things happen as they must under the supervision of providence. Apatheia involves a voluntary surrender to the divine will such that the mind can be secure against the attacks and vicissitudes of fortune, pity, or love. 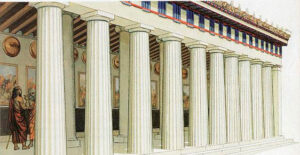 The second key principle of Stoic conduct is euthymia or well-being attained through four virtues – intelligence, bravery, justice, and self-control. Later Stoics impose another virtue, duty to promote the cosmopolis or rationally ordered world. Stoic contentment is further reinforced by the Stoic understanding of evil. If evil comes to a good person, it is only temporary and integrated with the greater good of the whole. One should live in harmony with nature and accept one’s place within it. Stoics substitute for a master an apprenticeship to wisdom and the imitation of a wise man.

In brief form, contentment for the Stoic is found in a rational adjustment of one’s aims and conduct to the purposes and laws of the universe. Next we look at Epicureanism; join me then.