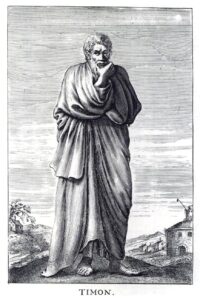 So far in our examination of contentment as depicted in ancient Greece we have looked at Plato’s dialogues, Aristotle’s Nicomachean Ethics, and the legacy of the Cynics. Plato highlights virtue and ordering of the soul, Aristotle virtue, self-sufficiency, and contemplation, and the Cynics extreme self-sufficiency through strength of mind to want nothing, consideration of a guide, and purpose from modeling cynical virtue. We take on next the second Hellenic tradition, Skepticism.

It is worth noting that I reviewed this branch of philosophy in an earlier blog on certainty.2 We saw then that the ancient Greek word, skeptikoi, means ‘inquirers’ or ‘investigators’ which is more distinctive of its later form. In its earliest form, called Pyrrhonism after its founder, Pyrrho of Elis, it was a quest to achieve Eudaimonia or “happiness in the conduct of life” and ataraxia or untroubledness. Pyrrho offered no system or method as, in fact, he questioned the truth of all philosophical or religious beliefs and saw them as the very source of much of humanity’s uneasiness. Instead he offered an agoge or way of living, based on utter apathy to objects, dangers, and pleasures, tranquil moderation, and indifference to intellectual dogmatism. His ‘system’ then merges agnosticism common sense.

His movement, eventually became known as skepticism because of the continuing inquiry of his successors as to whether truth is possible. Nonetheless contentment continued to be seen as freedom from anxiety about philosophical and religious pronouncements paired with an embrace of the ‘Practical Criterion of the Skeptics,’ which states one should follow “the guidance of nature, the compulsion of the feelings, the traditions of laws and customs, and the instructions of the arts.”3

To reiterate, for the Skeptics, ataraxia is not paralytic anesthesia, but peaceful living according to the institutions of one’s country and dictates of one’s own feelings, experience, and common sense. It seeks a peaceful life, not an imitation of death.4 By suspending judgment in philosophical matters, conflict is averted and contentment is facilitated.

The weakness of skepticism is that in its extreme or radical form,  tranquility is thwarted or diminished by the uncertainty of every belief or presumed fact. David Hume points out this quandary in the 18th century – noting we must live as if some uncertainties are fact (e.g. cause and effect, science). For instance living as if everyday dangers are dubitable will lead to a precarious existence (Pyrrho’s disciples were known to follow him around to be sure he would not step into a hole, off a ledge, or in front of a moving cart).

Nevertheless Pyrrhonic skepticism is a potent means to contentment. Doubt and suspension of belief about philosophical, religious, and I would add political, dogmas plus common sense moderation offer a simple method for calming one’s anxieties and achieving satisfaction with oneself and one’s circumstances. In reality this is the most common path followed in our time at least in the West, although it is unclear how successfully by most of us.