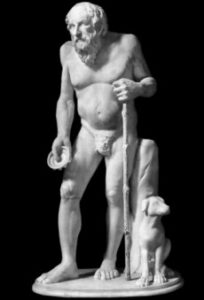 “Time makes even bronze grow old, but thy glory, Diogenes, all eternity will never destroy. Since thou alone didst point out to mortals the lesson of self-sufficingness and the easiest path of life.” – Ancient Greek Memorial to Diogenes of Sinope, according to Diogenes Laertius in Lives of the Philosophers.1

Last time we examined contentment as a piece of the meaningful life in Plato’s dialogues and Aristotle’s Nicomachean Ethics. Instead of withdrawal, meditation, and the guidance of a master as professed in the East, they invoke virtue, self-sufficiency, ordering of the soul, and contemplation.  However on the whole the earliest Greek religion, literature, and philosophy are surprisingly quiet on tranquility and contentment. After the Macedonian conquest of Greece, philosophers pivot and contentment and tranquility rise in importance, perhaps in response to being subjugated to military authority with its reduction in liberty. It is as if philosophers are seeking a psychological means to cope with this change in political reality.

Four philosophical “systems” – Cynicism, Skepticism, Stoicism, and Epicureanism – appear after Socrates, all of which to some extent claim the mantle of his teaching. We will start with the Cynics whom I introduced in the section Suffering, subsection Asceticism.2 This quasi-school of philosophy began with Diogenes (known as “the dog” or cyn in Greek) who was a student of Antisthenes who in turn was a student of Socrates. Virtue for Diogenes and  the Cynics is recalibrated from the four classic virtues to four new ones: self-sufficiency, freedom, detachment, and moral toughness and endurance. For the Cynics, poverty and simplicity are the paradoxical avenue to peace and contentment. The rational person abandons the artificial values and material goods of society and embraces the benefits of living naturally and unabashedly. 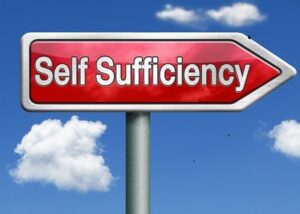 For the Cynics contentment originates in strength of mind to want nothing and to lack nothing. It is further reinforced by purpose in modeling cynical virtue for others to follow. The pursuit of knowledge endorsed by Socrates and the contemplation of truth espoused by Aristotle are considered superfluous. Cynicism is more practical and active than these earlier teachings. However the Cynics recognize a desperate life on the street requires training and the inexperienced should seek assistance from an experienced Cynic. In short, the contentment of the Cynic diverges from Plato and Aristotle and mirrors somewhat the Eastern tradition with detachment, through ascetic practice but not societal withdrawal, and endorsement of a guide in its practice.

Next we look at the Skeptics.