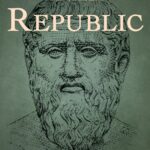 Last time we ended on contentment as presented in the first of two dialogues by Plato, the Phaedo. In the second dialogue, Republic Book IV, Socrates responds to Glaucon’s doubt that the just man is happier than the unjust one, Socrates taking him via a long road comes at last to the following statement:

“But in reality justice was such as we were describing, being concerned however, not with the outward man, but with the inward, which is the true self and concernment of man: for just man does not permit the several elements within him to interfere with one another, or any other, or any of them to do the work of others;  – he sets in order his own inner life, and is his own master and his own law, and at peace with himself; and when he has bound together the three principles within him…but has become one entirely temperate and perfectly adjusted nature, then he proceeds to act, if he has to act, whether in a matter of property, or in the treatment of the body, or in some affair of politics or private business, always thinking and calling that which preserves and co-operates with this harmonious condition, just and good action, and the knowledge which presides over it, wisdom, and that which at any time impairs this condition, he will call unjust action, and the opinion which presides over it ignorance.”2 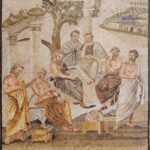 The lessons of Socrates and Plato are further processed by Aristotle, Plato’s most famous student and one who eventually rejected much of his thought. Aristotle comes across as more pragmatic and less spiritual, devoting more thought to the notions of happiness, never mentioning tranquility of the soul. In the Nicomachean Ethics, he argues that most men erroneously seek happiness in pleasure while in fact the highest essence of man is reason. He determines that a life of virtuous activity in accordance with reason will be the happiest, and it turns out the activity most in accordance with reason is contemplation of truth within self-sufficiency – ideas seemingly suggestive of contentment and serenity of the mind. Consider the following:

“Perfect happiness consist in the life of thought or contemplation of truth, in which we approach the life of God. But, with his composite human nature, man finds a secondary happiness in external things and in the practice of the moral virtues in his relations with other men.”3

We see then that for Socrates and Plato, contentment comes from virtue and ordering of the inner self, perhaps combined with belief in an immortal soul and the pursuit of knowledge. Aristotle also emphasizes virtue, but highlights contemplation and self-sufficiency rather than ordering of the soul per se. None of the three stresses withdrawal or renunciation or the need for a spiritual guide. However, contentment is only addressed obliquely in their texts even if it is implied throughout. The West had to wait for later Hellenic philosophers to see a more systematic analysis of human contentment. We pick up there next time.