“What is opposed brings together; the finest harmony is composed of things at variance, and everything comes to be in accordance with strife.” – Heraclitus (quoted by Aristotle, Nicomachean Ethics)

We have just examined the paths to contentment conveyed by four Eastern philosophical traditions. They emphasize withdrawal or at least detachment from ordinary life, meditation on eternal truths, benefits of a guide or master, and de-emphasis on worldly purpose. Today we change continents but continue with ancient thinkers as we look at the wisdom of Western sages mainly from ancient Greece and Rome.

We might begin with an observation – the earliest Greek philosophers and the polytheism of that time seem to neglect the search for contentment, though of course we have only fragmentary texts for most of the pre-Socratics. What we know of their religion and from the most complete texts of that time, Homer’s Iliad and Odyssey, seem strangely quiet on the hope of human satisfaction and tranquility. The world is pictured tragically, with mostly indifferent of hostile deities, unending human strife, and an afterlife of dark, stagnant, misery. Happiness is mentioned, but only as temporary and superficial. We can only guess that this pessimism springs from the precarious life in this land of relatively low crop fertility and of isolated city-states, constantly threatened with invasion by more powerful neighbors. It is perhaps no surprise that Heraclitus, one of the great early philosophers of that region of the world, sees God as an eternal fire and reality as like a river, which is never the same when one steps in it twice. Pythagoras comes the closest among the pre-Socratics to the ancient Eastern sages in his demonstration of contentment by example through an ascetic lifestyle of strict vegetarianism and celibacy – practices he may have adopted from the East. 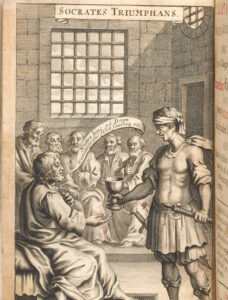 Contentment appears first in ancient Greece with Socrates through the dialogues of Plato, two of which I will use as examples. The earlier of these is the Phaedo which tells the story of the death of Socrates. There is perhaps no more poignant example of human equanimity as Socrates when he accepts his unfair death sentence and drinks the poisonous hemlock without hesitation. He explains to his attending disciples that his tranquility is based on his belief in the immortality of the soul, his pursuit of knowledge, and the arraying of the soul “in her own proper jewels, temperance, and justice, and courage, and nobility, and truth…”1 that is to say through wisdom.