Mayer believes death has a different meaning for us if we survive it versus if we do not; but this difference is an empirical problem for which we have no empirical evidence at all. There simply are no probabilities either way; we either do or we don’t and even an agnostic view imposes some risk for our understanding on life and death. One’s opinion is in effect an extension of one’s worldview; that is, a sensible universe holds a promise of immortality while a purposeless one does not.  He concludes “Death, and death alone, is at once a totally objective and a totally subjective reality.”5 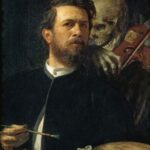 He then examines various perspectives. Our ancestors hoped for salvation in a then unchallenged matrix of religious belief. In contrast Paul Tillich, the modern Protestant theologian, argues the tragic consequences of truth revealed by science do not justify its denial, transforming the question into whether humanity can find sufficient meaning in a diminished place in the cosmos or will turn to newer ‘theologies’ such as Fascism or Communism. Erich Fromm thinks that psychoanalysis can reconnect us to the unconscious which in turn is associated with religious feelings and frees us from individuation in favor of the All. The great existentialists such as Jean Paul Sartre think each person must seek on their own “freedom-toward-death” and liberation from terror in order to achieve “authentic existence” as an individual.

Instead of modern pessimistic notions of life as absurd we may choose instead to circle back to ancient pre-Christian philosophies of happiness in harmony of the soul, virtue, and the secular ‘blessedness’ touted by Aristotle. If these possibilities are real, then death “even as the end of the ‘biological entity’ may still crown something more than a farce.”6

Man, thinks Mayer, is defined by his burying of the dead – as opposed to our reaction to the deaths of thousands, or millions – but by the seriousness symbolized in the funeral procession. But humans also the only animals to celebrate death, seeking splendor in the deceased through ritual. 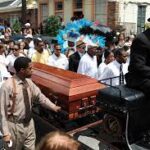 He quotes Patrick O’Donovan on funeral rites, “It is a gesture made over and over again…a proud, half-conscious assertion that man is not an animal that dies alone in a hole.”7 Moreover he notes a paradox; supernaturalists and naturalists agree on this ‘half-conscious assertion’ – whether one believes in immortality or not, one believes in the ritual; even though neither should logically attach significance although for opposite reasons.

Bereavement is another feature of humanity. As         Freud tells us, we assume a special attitude to the dead, suspending criticism and recalling only that which is favorable to their memory. Freud tells us “consideration for the dead, who no longer need it, is dearer to us than the truth, and certainly for most of us, is dearer also than consideration for the living.”8 This attitude towards death according to Freud impacts our own lives. Life is impoverished and uninteresting when life itself may not be risked, but when death occurs “not one by one, but many at a time…Life has, in truth, become interesting again; it has regained its full significance.”9