“A man becomes truly Man only when in quest of what is most exalted in him. True arts and cultures relate Man to duration, something other than the most favored denizen of a universe founded on absurdity.” – Andre Malraux, Voices of Silence.

In our consideration of the interrelationship of the purpose of society and of its members, we have seen how Aristotle places emphasis on the polis in promoting a good life for its citizens who reciprocate by pursuing learning and virtue, while Confucius stresses the ordering of society by government for sustenance, education, and leisure through a program of mutual propriety. Today we look at the Enlightenment thinkers starting with the pessimistic worldview of Thomas Hobbes (1588-1679), author of Leviathan. 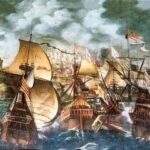 Born in the year of the Spanish Armada’s attack on his homeland, Britain, Hobbes begins with a staggering proposition: civilization is humankind’s attempt to avoid death, particularly a violent death. In the quest to prevent this outcome, humans exchange their natural freedom to do whatever they want for the sovereignty of a commonwealth. Metaphorically the state is an artificial man; sovereignty is the soul, rewards and punishments the nerves, wealth its strength, peace its health, equity and law its reason and will, and most importantly, safety its main business.1

In the natural state, humans are approximately equal and compete for their desires necessary to happiness which in effect leads to a state of war between all people. The state prevents this continual conflict by assuming the power of the citizenry and arbitrating differences between them. Political association then establishes the civil society and permits an escape from universal strife. There are two key rules in this game: first, the abdication of individual power is balanced by consistent treatment of everyone through ‘contracts’; and second, the full power to enforce these contracts is held by the sovereign power of the state led by one person – in effect, a ‘mortal god.’ It is the duty of everyone else to obey the sovereign as long as he or she protects the individual’s rights. 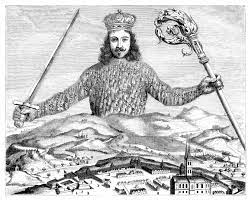 In short, for Hobbes, the main purpose of any civilization is to ensure this covenant of citizens and the state wherein the individual surrenders power to the state in return for the expectation of equitable treatment and safety from violent death. The fundamental purpose of each citizen then l is to obey the sovereign and fulfill one’s contractual obligations.