“The leitmotif which I recognize in Galileo’s work is the passionate fight against any kind of dogma based on authority. Only experience and careful reflection are accepted by him as criteria of truth.” – Albert Einstein1. 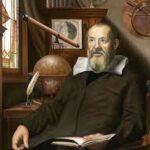 Returning now to cosmic virtue in its extraordinary form, we come upon the great hero scientist, Galileo Galilei (1564-1642). He grew up in Renaissance Italy which was still shaking off the intellectual inertia of the Middle Ages and still subjugated to Roman Catholic dogma itself inexplicably shackled to ancient Greek knowledge (especially Aristotle and Ptomely). Intended for medicine by his father, he switched to mathematics while at the University of Pisa writing his first essay on hydrostatic balance at age 22 and being made professor of mathematics there at age 25. At about this time he showed his contempt of unquestioned authority, challenging the teaching of Aristotle that the speed of falling objects varies according to their mass, by reportedly dropping two balls of different weights off the leaning tower of Pisa.

He moved to the university at Padua (Venice) in 1589 where he invented to a type of thermometer, the first astronomical telescope, and a geometric compass. With his telescope he documented the four large moons of Jupiter, the “ears” of Saturn, the roughness of the surface of the moon, sunspots, and the phases of Venus – thus challenging the Earth-centered cosmos and the unchanging perfection of the celestial realm. He visited Rome in 1615 where he was received favorably, but his attempts to persuade the Church to accept the ‘Copernican’ sun-centered solar system were rebuffed. He may have been warned then that asserting that the sun is unmovable would be considered heresy. But he refused to yield, then taking the critical step in all scientific discovery – declaring an observationally or experimentally confirmed theory is no longer an hypothesis, but a scientific truth. 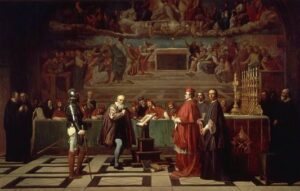 In in a letter to the Grand Duchess of Tuscany published in 1615 his virtuous attitude regarding cosmic reality is fully revealed, “Nature is inexorable and immutable; she never transgresses the laws imposed upon her, or cares a whit whether her abstruse reasons and methods of operation are understandable to men. For that reason it appears that nothing physical which sense-experience sets before our eyes, or which necessary demonstrations prove to us, ought to be called into question (much less condemned) upon the testimony of Biblical passages which may have some different meaning beneath their words.”2