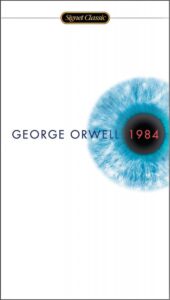 Before returning to virtue and the meaningful life, I thought I would write about my latest book finished, George Orwell’s 1984. I missed this book in high school when I was assigned Neville Shute’s excellent On The Beach while other students read 1984, Alas Babylon, or Brave New World. I finally picked up the Signet Classics version with an afterword by Erich Fromm at a local book fair last September. The final impetus to read the book was seeing the last program of 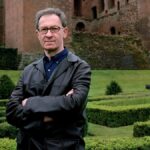 Simon Schama’s A History of Britain called The Two Winstons. In that program he weaves the fabric of postmodern Britain by comparing and contrasting Winston Churchill with Eric Blair (pen name George Orwell) whose main character in 1984 is named Winston Smith.

Blair was born in British India in 1903, but schooled at Eton in England. He had mostly unpleasant experience as a policeman in British Burma and as a Loyalist in the Spanish Civil War. He was a socialist, but detested communism and especially Totalitarianism. He also detested dishonesty and cruelty, particularly by government, even when done for presumably good ends. He wrote eight novels although only one other, Animal Farm, is well known, He also wrote his autobiography and several political essays before dying of tuberculosis at the age of forty-six.

The novel can be summarized as one man’s journey and failure to remain free and sane in a future dystopian police state. The book is full of wonderful  made-up terms with poignant meanings, such as Newspeak, doublethink, thoughtcrime, unperson, and blackwhite. Blair invents the speakwrite (voice-recognition dictation), the memory hole (where accurate historical documents are incinerated) and the ubiquitous, dreaded, two way telescreens. Winston lives in a world of Victory Mansions (dilapidated old buildings) and Victory Gin (a horrible-tasting alcoholic beverage). Society is partitioned into 2% Inner Party, about 13% Outer Party (those most to be thought controlled), and 85% Proles (poor, uneducated, and insignificant workers). Party members participate in daily Two Minutes Hate and annual Hate Week. 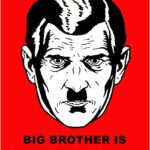 Everywhere are oversized pictures of the Stalin-like Big Brother who “is watching you.”  The government consists of four paradoxically-named branches: the Ministry of Truth (which disperses misinformation), the Ministry of Love (which brutally maintains order), the Ministry of Peace (which maintains perpetual war to keep the citizenry poor and distracted), and the Ministry of Plenty (which assures unending poverty and scarcity). Three oxymoronic slogans describe the Party’s philosophy; (1) War is Peace, (2) Freedom is Slavery, and (3) Ignorance is Strength.

Frequent readers of this site will know that in general I avoid social commentary and political philosophy, but one would be hard pressed to read 1984 and not notice some haunting analogies between Orwell’s dystopian world and our own. Instead of the Party we have the tyrannical majority (or is it the loud minority?). Instead of the ‘rectification’ of history, we have the press’s control of its chosen and changing narrative, public ostracism for contrary viewpoints, and disinformation in the form of internet ‘fake news’ and major party propaganda. Instead of telescreens we have pervasive social media, cell phone tracking, and cameras on every corner. I leave the reader to further critique our reality as seen through the lens of 1984.