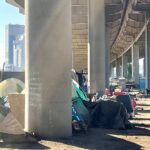 “But now how is it possible for a suffering which is not mine and does not touch me to become just as directly a motive as only my own normally does, and to move me to action?… although it is given to me merely as something external…I nevertheless feel it with him, feel it as my own…” – Arthur Schopenhauer, On the Basis of Morality.

I thought I would take a break on the long path of virtue and the meaningful life to stop and describe my reflections on a recent outing to help the homeless. Last week I joined a small group of faith-based philanthropists on their weekly Saturday morning ‘mission.’ We were 4 people (three men and one woman roughly ages 40 to 67) in three vehicles, visiting three aggregates of homeless individuals (‘tent cities’).

In my friend’s pickup truck were the precious, mostly nonfood supplies – he tells me there are many sources of food for these unfortunate people, but for little else. The supplies we provided included small propane tanks (about 6 hours heat, but also good for cooking and heating up coffee), bottled water, protein drinks, canned tuna, gloves, socks, toilet paper, wet wipes, soap, hygiene kits, batteries, and feminine products. We also had a limited supply of pillows, tents, blankets, shoes, and stoves several of which he brought at the request of specific individuals the week before. There were also hot meatless burritos he had made that morning starting at 5:30 AM, which were very much appreciated by our patrons. Perhaps 40-50 persons total accepted our wares – I would guess ages 20-70 with an average of about age 40 and about 70% male. Persons of color were surprisingly few – apparently they choose local shelters over the streets. 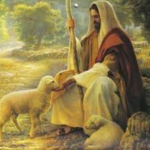 Before we left on our mission, there was a very brief sermon by a clergyman done remotely by speaker phone. His emphasis was not only on helping the unfortunate, but also on the reason – the command of Jesus to the apostles to “Feed my sheep!” He reminded us this is not mere community service as for example one does in a fraternity or social club, but fulfilling the wishes of the divine. Other than this there were no religious linkages. None of the party proselytized or even mentioned Jesus, God, or the bible on our rounds, nor were there any prayers. The supplies were given completely unconditionally – it was truly touching!

Also noteworthy was the unexpected discipline of the patrons who lined up in front of the table of goods and waited their turn, asked permission to take things they needed, and offered genuine gratitude. I am told that these camps have their own ethics; for instance, he who steals from another may find his tent and possessions burned to the ground. We saw at least one instance of a couple taking in a newly homeless young woman. And I must confess I was surprised that I never felt the least bit in danger. We learn that civilization survives even extreme poverty and homelessness.

I will take up a few philosophical matters related to my experience in the next blog. Join me then.