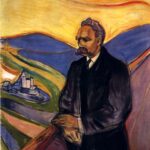 ‘What do I matter?’ is written over the door of the thinker of the future.” – Friedrich Nietzsche.

The last three posts looked at the threat nihilism poses to the meaning of life and a response to its key arguments. Today we rehearse the evolution of a nihilistic viewpoint and subsequent reversion to meaning in the example of Friedrich Nietzsche.

Nietzsche was the son of a Lutheran pastor and reports that he had “seen God in His glory when he was twelve.”1 As an adult he abandoned Christianity in keeping with his era as science became absolute and expected to produce a new system of metaphysics. But his turn on Christianity may have also resulted from his observation that persons of his day including scientists still embraced Christianity though only in a lukewarm fashion.*

Nietzsche began by embracing Schopenhauer’s pessimistic concept of human suffering as the result of the ever-striving will which drives humans and all entities in the universe. In addition, his classical studies brought him to two startling discoveries.

First, the heroic age of Greece and metaphysics of continual change in the universe advanced by Heraclitus were undone by Greek philosophers starting with Socrates who sought morality and absolute truth in “the weirdest equation ever”, that is, “Reason = Virtue = Happiness.”3 Second, Christianity’s truths – “the lie of the belief in God”4 and the inversion of morality from strength and dominance of the aristocrats (Classical Greece and Rome) to the slave morality of goodness as meekness and humility – had emasculated European civilization.

Nietzsche came to see that the European nihilism of his time as the direct result of atheism and the eradication of previous Christian morals. “The recoil –stroke of ‘God is Truth’ in the fanatical Belief is: ‘All is false.’ ”5 Doubt in morality is the decisive factor in nihilism, because the downfall of the moral interpretation of the universe leads to the thought: “Nothing has any purpose.”6 He sees the consequence of this nihilism in Nationalism, Anarchy, the general good as exacting the surrender of the individual, and the psychological pain of futility, personal feelings of worthlessness, and eventually self-annihilation. Perhaps no other philosopher has seen more clearly or expressed more eloquently the causes and threat of nihilism.

*This is reminiscent of the observations of Kierkegaard in Denmark a few decades earlier.