“For the person pressing on towards happiness must even be prepared to go through fire and sword” – Diogenes of Sinope.

Today we pick back up where we left off on the subject of asceticism by returning to the ancient Greeks. The word asceticism is derived from the Greek word, askesis, meaning exercise, in this case the exercise of self-denial. Pythagoras (6th century B.C.E.) is often seen to be a proto-ascetic, a strict vegetarian and celibate who lived very modestly – a practice he may have adopted from the East – and a paradigm for his school in ancient Italy.

The epitome of Greek asceticism is thought to be Diogenes of Sinope (4th century B.C.E.), a student of Antisthenes who is considered the father of asceticism and who was a student of Socrates. Diogenes was known as “the dog” (cyn in Greek) because of the life he adopted; but he inverted this moniker by asserting that the happiness of a dog is possible for men. The cynics were not a school but rather an erratic succession of individual philosophers who renounced worldly desires to pursue a life in accordance with virtue and independence. They led a simple life of eating just enough to survive, wearing a simple shabby cloak, and limiting additional possessions to perhaps a cup from which to drink water and a staff. They had great contempt of wealth, prestige, and lineage. Their logic is simple enough – the gods want nothing; therefore men most like the gods will want next to nothing. Only virtue is good and vice bad; everything else is of no value either way.

Virtue for the cynics is quite different from that traditionally associated with the ancient Greeks (courage, temperance, fortitude, and prudence) and includes: self-sufficiency (autarkeia), freedom, detachment, and training for moral toughness and endurance. For cynics, poverty is the paradoxical avenue to peace and contentment making them the first philosophers to eulogize poverty as a blessing in disguise. They affirm a rational distinction between natural and artificial (societal) values. Happiness is found by strength of mind to want nothing and to lack nothing, and the toiling and painful effort of this moral struggle is the short cut to virtue. While fundamentally antisocial, the cynics were not hermits; they advanced a form of philanthropy; serving as models of virtue for others to follow. They generally rejected intellectual arguments, instead offered an ideal practical example of autonomy which gave spiritual hope to the poor and oppressed.1,2 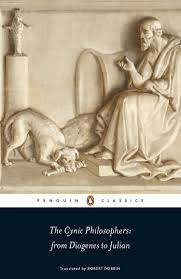 Cynic practice and thought was instrumental in the development of stoicism, Epicureanism, skepticism, and possibly influenced the early Christian hermits. Emerson echoes their philosophy when he says, “The amount of a man’s wealth consists in the number of things he can do without.” Its precepts continue to this day in the form of monasticism and perhaps the modern concept of simplifying life as a means to happiness. Materialism then can be seen as the basis for much suffering and its renunciation as a means to tranquility and moral strengthening. Ironically, the initially unpleasant detachment and relinquishing of goods and luxuries may reduce human suffering on balance and foster ultimate contentment.