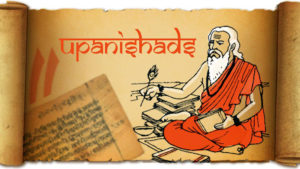 “Once upon a time the days seemed long to me when my heart was sorely wounded through asking favors from the rich; and yet again the days seemed all too short for me when I sought to carry out all my worldly desires and ends. But now as a philosopher I sit on a hard stone in a cave on the mountainside, and time and again I laugh when I think of my former life.” – Bharti-hari.

The earliest known ascetics appear in India where the ancient polytheistic Hindu religion passed down in the Vedic texts was gradually refined by committed spiritualists into a near monotheism and profound philosophy preserved in the Upanishads. These great thinkers distilled from the Vedas the concept of a universal soul called Brahman. In circumstances of societal withdrawal and austere subsistence, they looked internally, peeled away their superficial identity – the physical or empirical self (guna) and the psychological self – and located an inner, unchanging self they named Atman (or purusha). Their ultimate discovery, perhaps the most sublime thought in human history, was that Brahman and Atman are the same, are one. But this deep truth can only be discovered as a direct experience brought about by rigorous self-denial and detachment, in effect, the conscious decision to induce suffering in oneself in order to extract this ultimate reality.

Of course most people could not desert their lives to practice the austere life of the ascetics and so a path developed for the common man. Hindus divide life into four parts: (1) brahmacarya ashrama, the student stage, (2) grihastha ashrama, the householder stage, (3) vanaprastha ashrama, the hermit stage, and (4) samnyasa ashrama, the contemplative stage. The last two require progressive asceticism. In the brahmacarya, the student studies the Vedas and the Upanishads as well as trains for his profession. In the grihastha, one works in his profession, has a home and a family, and fulfills his dharma or duty. The Bhagavad gita reveals the three ways to find purpose during this stage: (1) sattva, discipline in knowledge, (2) rajas, discipline in work, and (3) tamas, discipline in devotion (to Krishna). The operative term here is ‘discipline’ which, in fact, serves as the precursor of a future ascetic discipline.1

In this patriarchal society, when a man’s hair turns gray and he sees his children’s children, thoughtful men leave their homes [with their wives] and dwell austerely in huts in the forest, where they meditate on the problems of the universe and subject themselves to severe self-mortification in the belief that thereby they may escape from the bond which ties them to the cycle of birth and death and rebirth.2 . The fully ascetic elder devotes his life to penance and religious growth eventually forsaking all worldy attachments.

Next time we will look at the most famous Hundu ascetic practice,  yoga.