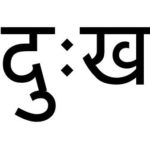 Last time we saw how Buddha’s First Noble Truth that life is suffering is the critical premise of his philosophy. Today we will expand his doctrine, and next time we will look at the interpretations of a contemporary authority, the Dalai Lama.

First we need to review briefly Buddha’s three primary metaphysical principles. The first is anatta or impermanence, the non-sustainability of things in the world. Attachment to temporal things is the main cause of our suffering. The second is anicca or the ‘no-self’ by which he means the non-substantiality of the self. Contrary to common belief and the tenets of most philosophies, Buddha says there is no soul, nor even an inner self. Our material being is anatta and our concept of self is illusion.

The third principle is pattica samuppada or ‘dependent organization.’ Unlike Western philosophy which sees reality deterministically as a linear series of causes and effects, Buddha teaches that whatever is, depends on something else, and yet there is a mutual dependence of all things. In fact all things are mutually self-creating and thus there is neither God nor independent beings. Reality has the nature of process, and things (including space and time) are merely abstractions. There is no being, only becoming.1 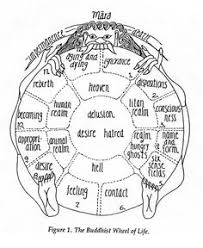 From these doctrines is derived the bhavacakra or ‘Wheel of Becoming.’ Each of us is the sum of  continuous processes which include the cycle of birth, death, consciousness, perception, and so forth. The wheel’s segments demonstrate the cyclic dependence of causality with old age and death as symbols of dukkha or suffering. Ignorance is the root-process of suffering. Buddha does not maintain that non-existence is the way to non-suffering, rather the recognition that there is no self beyond these processes means that there is no subject to suffer as long as there is no attachment to the parts of the wheel.2

Buddha’s lesson is powerful but challenging. Most of us recognize the impermanence of all things, but  nonetheless remain attached to them – loved ones, material goods, modern pleasures, society, and life itself. Detachment sounds easy, but turns out being extremely difficult. The illusion of self is still harder to fathom; our own self seems the most certain reality we know. Letting go of that foundation seems unthinkable. The interdependence of all things is easily accepted, but the wheel itself is unfamiliar especially in the West where reincarnation is not generally accepted. However, if we consider human history or even the many vicissitudes of an individual’s life given modern longevity, the cyclic nature of reality becomes more recognizable.

Perhaps we can  learn from a less didactic presentation on the place of suffering in Buddhism and a more practical approach to deal with it. Next time we will explore that possibility through the wisdom of the Dalai Lama.