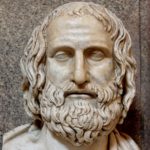 The penultimate topic in our examination of teleology is anthropocentrism, a word with three denotations: (1) regarding the human being as the central fact of the universe, (2) assuming human beings to be the final aim of the universe, and (3) viewing and interpreting everything in terms of human experience and values.1  Anthropomorphism is slightly different – the ascribing of human form or attributes to a being or thing not human – but its common use often blends both terms, and I will use them interchangeably here.

Early Greek philosophers made a giant leap when they moved the focal point of their inquiries from the supernatural realm to human experience. The gods they worshiped were already seen as having human form and emotions, thus it is no surprise they integrated anthropocentric elements into their developing physics, metaphysics, and epistemology. So they visualized the solar system as revolving around the earth, the universe as having a blueprint like a house, and matter as naturally at rest.

It took the scientific revolution of the 16th and 17th century to begin the process of cleansing human understanding of this bias. Max Planck saw the whole process of scientific thought as a constant effort to eliminate all ‘anthropological’ elements by progressively forcing into the background anthropomorphism until at some point it disappears in the ideal structure of physics.2 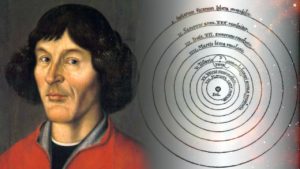 Most historians consider the demonstration by Copernicus that the Earth orbits the sun and not vice versa as the first step in the displacement of man from the center of the universe. Galileo’s confirmation with his telescope and Isaac Newton’s description of the laws of gravity and motion further eroded man’s centrality and called into question the reliability of his immediate perceptions in accurately defining reality. Darwin’s theory of evolution lowered man still further from his biological pedestal. Hubble’s discovery of the numerous galaxies and of a uniformly expanding universe showed us that our galaxy is neither solitary and unique nor central in the cosmos. Einstein’s theory of relativity upended man’s absolute or objective conception of the universe and substituted a subjective experience of space and time.3 Heisenberg dismantled even our common sense concept of matter and reality.

So what is our interest in anthropomorphism? We need to determine any residual influence it exerts on our search for universal truth, particularly with respect to the question of design and meaning in the universe. We will pick up there next time.