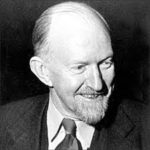 It is even as the destiny of man.

Last time we looked at the destiny of humanity as seen by the great paleoanthropologist, Richard Leakey. Today I would like to consider human destiny form the standpoint of the 20th century Harvard biologist, George Gaylord Simpson. His take on evolution is somewhat different; he notes few or no major classes of life go entirely extinct, rather species are replaced, based on randomness and sensate opportunism.1 He identifies three theories on the forces acting throughout the history of life: (1) materialistic, (2) vitalistic, and (3) finalistic.

He points out that “evolution is not invariably accompanied by progress, nor does it really seem to be characterized by progress as an essential feature.”3 There is general but inconstant expansion of life, varying sorts of progress among different lifeforms, but no evidence of a supernatural perfecting principle. He admits that “man, is on the whole but not in every single respect, the pinnacle so far of evolutionary progress.”4

Nonetheless “the first grand lesson learned from evolution was that of the unity of life.”5 Man is an animal, albeit fundamentally a new kind with a second order of evolution – the ‘inheritance of learning’ or ‘societal evolution.’6 This new phase of evolution does involve purpose and plan unlike organic evolution. Man “can choose to develop his capacities as the highest animal and try to rise still farther, or he can choose otherwise. The choice is his responsibility and his alone.”7 Therefore while organic evolution is amoral, societal evolution is moral with social and individual facets.