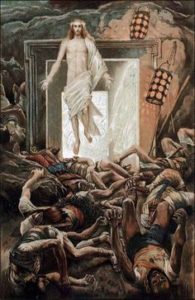 “And many of those who sleep in the dust of the earth shall awake, some to everlasting life, and some to shame and everlasting contempt.” – Daniel 12:2.

Last time we discussed the concept of immortality as reincarnation which dominated  ancient India, but was embraced by some Western philosophers. Resurrection is the second idea of immortality from antiquity and likely developed in the Middle East. The earliest Egyptians used mummification to prepare the bodies of Pharaohs (and others) for revivification in the afterlife. However this belief changed over time and eventually the preserved corpse served merely to transport the soul. Later religions starting with Zoroasterianism and Judaism and followed by Christianity and Islam believed resurrection of the physical body with its original soul was the nature of everlasting life. This principle makes great theological sense; if a perfect God created man as both body and soul, that combination is integral to man’s identity. The combination must be reconstituted in eternal form for that identity be maintained.

Resurrection is typically thought to be delayed; rather at death, the body begins to decompose while the soul enters a spiritual state either in heaven, hell, or in some faiths, purgatory. The resurrection of the merged body and soul is thought to occur on Judgment day at which time the body is considered glorified for everlasting life in God’s Kingdom. This miraculous reconstitution of the dissipated fragments is  of course feasible for an omnipotent deity.

The physical and scientific difficulties involved in the restitution of the original human body make this doctrine problematic. But there are also two metaphysical concerns. The first reiterates the prior arguments against the existence of the soul and an all-powerful deity. The second questions whether the reconstruction of a body from its prior parts allows identity. A common analogy is a tower of blocks constructed by a child that is knocked over by a parent and then put back together by the parent using the same blocks in the same order. Is the tower in fact the same tower the child created? Most of us would say it is not, and hence exact reconstruction is not metaphysical identity. Moreover if the reconstituted person is eternal after Judgment day but mortal in original form, it seems inconsistent to consider the two as identical.

It fact belief in resurrection depends on faith rather than reason and is thus philosophically untenable. However immortality of an incorporeal soul may be  more defensible as we will discuss in the next blog.